Modeling the Impacts of the European Natural Gas Supply Disruption

The European gas supply picture after recent geopolitical events has progressed far enough now to thwart any expectation of a quick return to normal market conditions. Major changes in gas supply and consumption are now required to be made to balance the markets. Supply shortages and soaring prices for natural gas (with cascading effects to oil and other energy commodities) will be felt over this year and next winter.

Natural gas consumption in Europe amounted to 480 BCM in 2021. Of this, 31% was imported from Russia through Ukraine, Belarus, Turkey and the Nord Stream 1 pipeline into Germany. The total amount of Russian gas delivered into Europe in 2021 is estimated to be 169 BCM. Deliveries via Ukraine accounted for about 22% of this total volume with Gazprom as the main supplier of all pipeline gas to Europe. LNG deliveries from Russia further accounted for an additional 18 BCM. At time of writing, current supply disruptions have sent TTF prices as high as $72 per MMBtu and even caused Asian LNG spot prices to climb as high as $60 per MMBtu.

Note, we have excluded the Nord Stream 2 (55 BCM) which has been suspended by Germany

This results in a total of 176 BCM of reduction of supply capacity should Russian exports to Europe cease (158 BCM by pipeline and 18 BCM from LNG). Whilst there are several outcomes that could potentially come into play in the near term, the following analysis aims to address two distinct supply disruption scenarios over the 2022-23 time-period. These two scenarios consist of an extreme case where all Russian capacity is excluded from the European market and a partial disruption where only Ukrainian pipeline flows are shuttered:

These two scenarios assess the range of impacts that can be anticipated given the disruption observed currently in the European market.

The following analysis is based on a variety of market intelligence gathered from various sources and information drawn from Energy Exemplar’s European gas and power PLEXOS datasets.

Under the two scenarios, Europe’s potential gas supply shortfall ranges between 38 BCM to 176 BCM. In both cases, European consumers will need to choose alternative strategies to mitigate these effects. These can be summarized as follows:

The net shortage under the Compete Cut Off scenario is 40 BCM leaving a 136 BCM shortfall after potential fuel switching and industrial curtailments are employed. In the Partial Import Reduction scenario we halved the mitigation effects to 20 BCM leaving an 18 BCM short fall. As a result, Europe will need to further increase domestic gas production and/or import additional pipeline gas and LNG to mitigate the reduction in Russian supply.

We estimate that increasing domestic gas production (North Sea and Netherlands) plus gas imports from other countries (Turkey, Algeria, others) could provide between 5 and 13 BCM of additional natural gas. While these additional supplies provide some relief, these volumes are not large enough to mitigate the supply lost especially in the worst-case scenario. 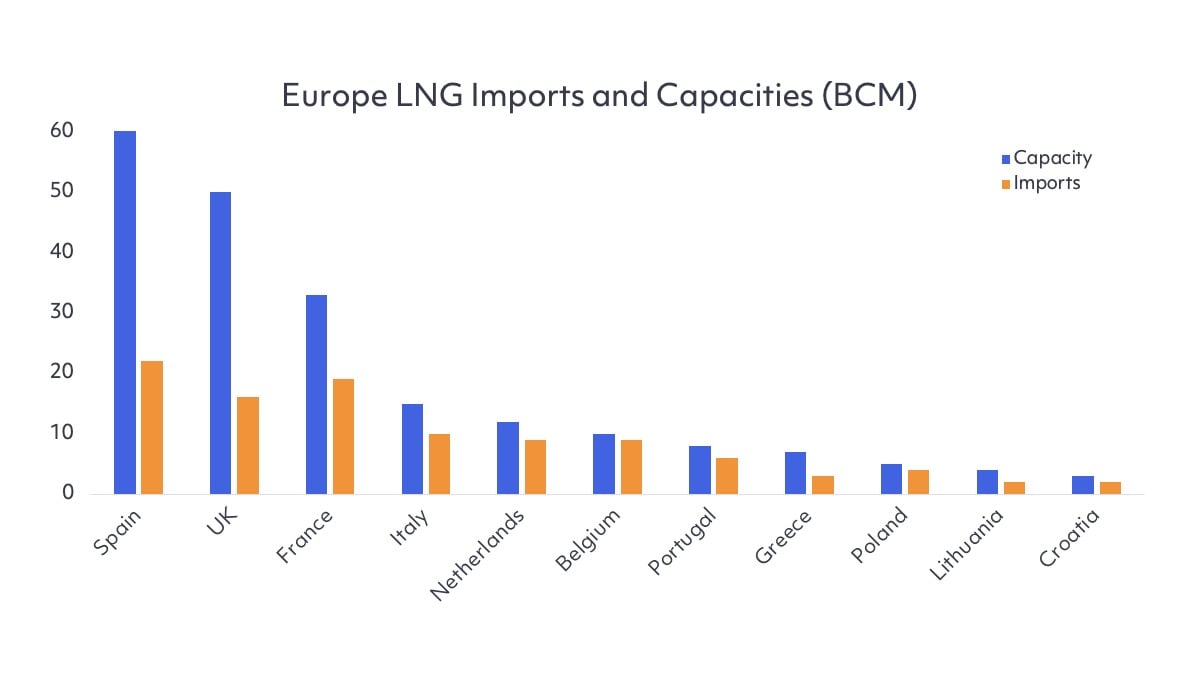 Redistribution of natural gas within Europe via increased LNG imports would be reliant on the existing pipeline network. However, capacity is significantly constrained between the southern (Spain) and western Europe (UK) to the east and northcentral Europe. Therefore, the excess regasification capacity in Spain, UK, France and Italy cannot completely alleviate supply shortfalls particularly to Germany, Poland, Slovakia and Hungary.

Although utilization rates range from 32% to 90%, directional pipeline flow constraints are the bottleneck limiting additional Europe LNG supply. We estimate that only 10 to 20 BCM of additional LNG supply can be achieved in Europe due to this constraint. As a result, spare LNG import capacity only provides limited relief to the gas shortage. Some additional gas could flow from Spain and France into central Europe but would not be sufficient to mitigate loss of Russian supplies.

Although spare European regasification capacity exists in various countries, excess global LNG liquefaction is limited. Historically, Europe is a heavy consumer of LNG sourced from more than a dozen countries with most supplies coming from just five. 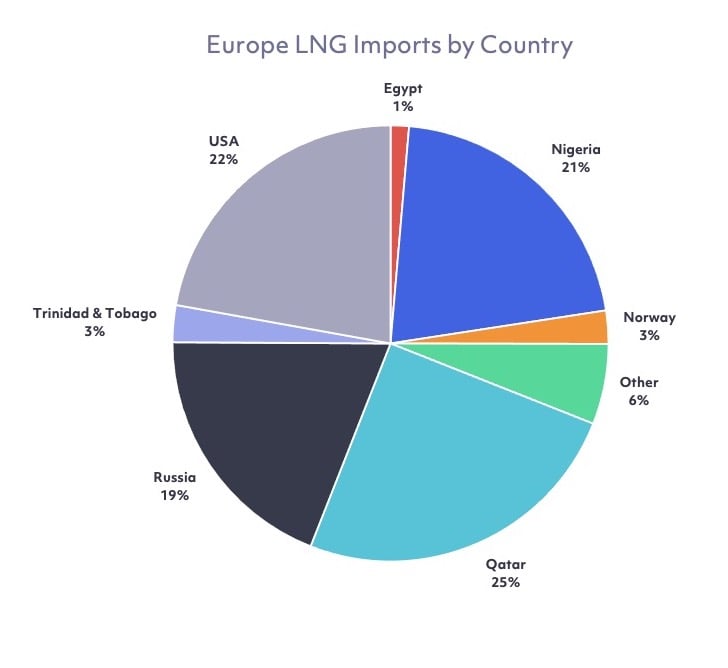 Traditional LNG exporting suppliers to Europe have been running at close to full capacity limiting additional cargos available in the near term. Most LNG trade is under medium- to long-term contracts therefore cargo diversions, particularly when LNG supply is short, are limited at best. Asian countries are the other main consumer of LNG and countries in Asia would be hard pressed to redirect large volumes of supplies to Europe unless substitute energy sources can be found.

Global LNG Markets have grown significantly over the past decade with US, Australia, Gulf states and others increasing supply. Overall Liquefaction globally was 550 BCM in 2021. As a percentage the European shortfall under our scenarios ranges between 6%-32% of the available global LNG supply. About 60% to 70% of global LNG trade is sold under firm, long-term contracts with fixed destinations. Some major contract holders like South Korea, Japan and China and their suppliers might be willing to redirect cargoes to Europe if cutbacks in Russian exports creates a worsening supply crisis.

The United States now has a total of 132 BCM of LNG export capacity with about 75% going to Europe. It is possible that a portion of the remainder could be diverted to Europe assuming that contract holders are willing to divert. In our analysis we estimate that 15 BCM of this capacity would be available from the US.

Middle East and Nigeria are the closest LNG supply options to Europe (excluding Yamal). Qatar has announced that their capacity is fully subscribed and would not have any spare export capacity available other than what is currently destined for Europe. Nigeria could potentially deliver between 2 to 3 BCM to Europe. Australia is a possible source for additional volumes. We estimate that Australia can supply up to 50% of the non-contracted capacity of 30 BCM to Europe. Based on these estimates, additional LNG exports to Europe could range between 11 to 33 BCM. These supplies can be easily accommodated with the amount of spare regasification capacity currently existing in Europe; however, pipeline bottlenecks could become a factor.

Storage provides balancing to meet winter gas demand peaks. Currently, storage levels have dropped to around 40% of capacity and can drop further as more gas is withdrawn to meet current demand during the spring. Furthermore, gas injections over the summer remain uncertain given record high gas prices. The futures market shows summer-winter spreads are backwardated suggesting that the market expects a return to more normal conditions. Aggressive injections of gas now could lead to enormous losses if the futures market is correct even if LNG imports can be increased. If on the other hand, the supply situation continues to deteriorate the natural gas balance in Europe would continue to be destabilized possibly resulting in even higher winter prices causing the market to revert to contango.

It should be noted that for the 2022-23 period, it would be nearly impossible to materially boost effective capacity of the existing pipeline infrastructure or storage injection/withdrawal capacity. Under these scenarios, fundamental price formation is replaced by extreme shortage pricing behavior. Under either scenario it is reasonable to assume delivered gas prices will be sufficiently high enough to attract the additional LNG cargos should they materialize.

Both scenarios require demand-side adjustments to balance the market and cannot merely rely on replacing Russian gas imports from other countries.

Focusing on the electric generation sector, Europe consumed around 85 BCM of natural gas to produce electricity in 2021. According to data from Bruegel, 10% of European gas-fired power plants can switch to burning oil1. Therefore, gas demand could be reduced by 8.5 BCM. Additional fuel switching can occur in the power sector with the potential of 9.5 BCM of gas-to-coal switching. This is all contingent on loosening emission standards for the balance of the year. Increasing solar PV via installation of new plants may help displace an additional 3 BCM of gas. In addition, delaying the scheduled closure of a German power plant could replace an additional 11 BCM.

In the industrial sector, curtailments in gas dependent industries like steel and aluminum are likely. Using data from our PLEXOS Europe fundamental model, an estimated 6 BCM of gas could be sidelined. Outside of market-based curtailments, energy conservation efforts can be encouraged in the residential and commercial sectors. We estimate a conservative 1-2%, or 2 BCM, of household and services demand could be saved. The total impact of demand-side adjustments range between 36 BCM for the Partial Reduction scenario to 73 BCM in the Complete Cut Off scenario. For Partial Reduction, we assumed about 50% of the maximum (73 BCM) reduction would be achieved. The impact of these conservation measures is shown by the following chart: 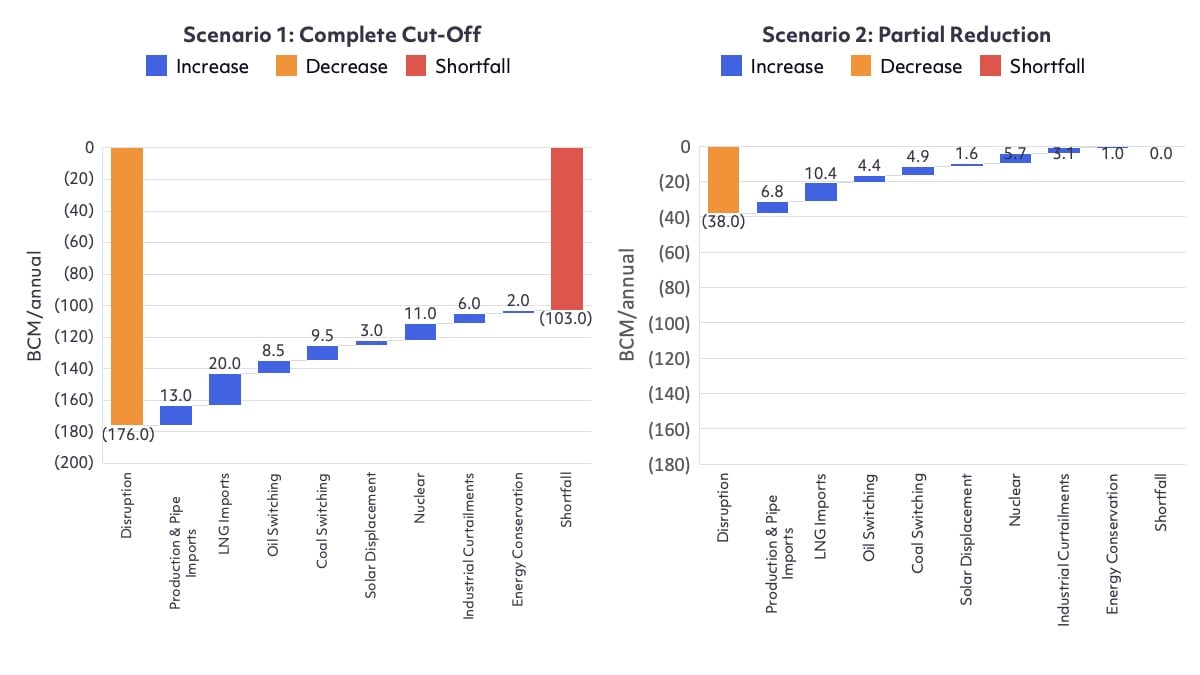 As seen in the chart above, the consequences of a Complete Cut Off would be severe. Despite all measures to conserve gas and procuring any available supply via pipes or LNG, Europe would be left with a shortfall of about 103 BCM. A 20% shortfall in supply will have a devastating impact on gas prices throughout the year with voluntary and/or mandated curtailments to gas use across various sectors. While an estimate of these impacts is beyond the scope of this analysis, it is imperative to stress the dire condition and potentially very high gas prices throughout this year and the next with larger consequences for the economy as a whole.

The Partial Reduction scenario on the other hand is nowhere near as severe. This view is based on an assumption that at least one-half of the remedial measures identified for the first scenario can be achieved to bring a balance between supply and demand. Assuming that just the Ukrainian supplies would be cut off, this scenario calls for some hard conservation measures in eastern Europe with moderate reduction in Western Europe to balance out the loss of Russian supplies that transit Ukraine.

Either scenario will likely result in sustained high gas prices affecting Asian energy imports, although Asia is less dependent on Russian gas. Only China is physically connected to Russia by pipeline, and only about 7% of the country’s demand is met through a combination of Russian pipeline and LNG imports. Japan receives about 9% of its contracted supply from Russian LNG. One potential impact would be reduced availability of LNG into Asia if flexible supply is diverted to Europe. If flows into Europe are disrupted, the competition for global LNG would intensify with Asian LNG prices also climbing up in tandem with Europe. If this were to play out, Asian utilities would likely increase their use of coal to mitigate the impact of high gas prices to free up LNG supply.

Special thanks to the Authors and analysts at Energy Exemplar who contributed to this study:

We love it when our blogs come from specific people but often it's a team effort. These blogs are written by the numerous outstanding people at Energy Exemplar.