Greece is a country with more than 200 islands dotting the Mediterranean Sea, of which many are inhabited and have mountainous terrain. As such, the country faces some unique circumstances in providing reliable, economical, and sustainable electricity to citizens and businesses.

Until about 15 years ago, Greece had relatively limited access to the greater European power markets, tells us John Dimitropoulos, a director in the energy department of Grant Thornton in Athens, Greece. It had the electricity interconnections with neighboring countries in the Balkans, and Italy. But the markets were not integrated, and the country didn’t have access to mainland Europe’s electricity interconnections.

However, the story of connecting the Greek islands’ electric grid goes back much further. In the 1960s, the main goal was to simply provide power to inhabited islands. To accomplish this, the power company installed diesel or HFO generators on island complexes. A typical arrangement was that an internal combustion engine (ICE)-based plant was housed on a bigger island with radiant link connections to smaller islands around it. Up until recently, even the island of Crete—the largest and most populous Greek island—wasn’t interconnected. Today, there are still around 30 Greek islands being powered by similar plants.

Dimitropoulos, who also leads the Energy Market Modelling team, says that the local Transmission System Operator (TSO) has been trying to interconnect the Greek islands many years, but it hasn’t made economic sense.

“Generally, it has not been very easy to do because the economics were mostly marginal or at best non-feasible,” Dimitropoulos says.

With the global push to reach net zero, the time has come to replace and upgrade the very expensive, old and inefficient ICE plants. So, Dimitropoulos and his modeling team at Grant Thornton conducted a study to come up with an innovative solution to this challenge. One solution was to use floating thermal generation, using gas, to replace the old ICE plants. But the study wasn’t just about how to replace the generators, it was also about understanding what happens to the new units after interconnection is achieved.

Energy Exemplar’s PLEXOS software was selected to conduct the study. As existing PLEXOS users, Grant Thornton already had a detailed representation of both the electricity and the gas system of Greece, including interconnections for both electricity and gas in the wider region.

"We had our main modelling platform for the whole system in PLEXOS, so it was very easy."

The team wanted to look at a period of about 15 years—eight years of units operating without interconnection and another seven years with interconnection.

“It was very interesting to play out the potential scenario of the gradual interconnections of the island complexes—starting from the north as it is in the TSO plans at the moment—with the new thermal units and then understand what may happen to the new units as interconnections take place and new things develop in the European market,” according to Dimitropoulos. 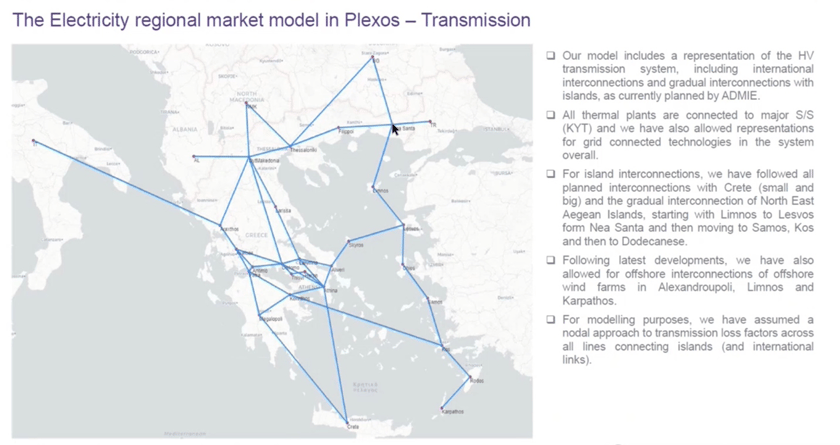 Another reason for looking at alternative solutions to diesel ICE plants is the ambitious plan Greece has to transition to renewable energy. The country wants to transition away from lignite coal generation and move towards more sustainable sources, like offshore wind, solar, hydrogen, and others.

The modeling team was also running a PLEXOS gas model in parallel, in order to see the evolution of price in the newly-formed gas spot market in Greece. They wanted to explore what happens to the prices of LNG import into terminals versus pipeline gas and what that means for the price that was assumed for the years ahead.

Some of the insights from Grant Thornton’s PLEXOS study of Greece:

Another interesting situation to consider: The Greek government has proposed the idea of introducing a framework for installing 2-2.5 Gigawatt of offshore wind in areas of the Aegean, which could overlap with areas where potential new cables may cross. Dimitropoulos says that means that if Greece was to plan ahead for an offshore electricity grid to connect offshore wind, it also makes sense to connect the islands as well, and in some cases, even use islands as hubs.

Dimitropoulos goes as far as to say that “there may be a synergy between connecting islands that were otherwise non-connectable because the economics were not favorable, to serve also the interconnection of offshore wind, and potentially look at the case of conventional thermal stations on the islands working with offshore wind to provide new services. It makes the whole concept very different and that's what we're trying to do as well.”

With the help of PLEXOS, the Greek power system and the interconnection of the nation’s islands can be evolved through innovative, reliable, and economic solutions.

We love it when our blogs come from specific people but often it's a team effort. These blogs are written by the numerous outstanding people at Energy Exemplar.

Renewable Energy: Planning and Preparing the Power Grid for the Future